Prime Minister unveiled a plaque at the site of original Port Jetties to commemorate 150 years of the Kolkata Port Trust (KoPT).

Shri Modi termed that it is a privilege to be a part of the 150th anniversary celebrations of the KoPT a historic symbol of the country’s water power.

“This port has stood witness to many a historical moment in the country like India getting independence from foreign rule. From Satyagraha to Swachhagraha, this port has seen the country changing. This port has not only seen consignors, but also the carriers of knowledge who have left a mark on the country and the world. In a way, this port of Kolkata symbolizes India’s aspiration for industrial, spiritual and self-reliance”, the Prime Minister added.

The Prime Minister also launched the Port Anthem during the event.

PM stated that the long coast line of India from Gujarat’s Lothal Port to Kolkata Port was not only engaged in trade and business but also in spread of civilization and culture across the world.

“Our government believes that our coasts are gateways to development. This is the reason the government started Sagarmala project for modernizing infrastructure and improving connectivity of the Ports. Thirty six hundred projects worth more than Rs 6 lakh crore have been identified under this scheme. Out of these, more than 200 projects worth more than Rs 3 lakh crore are underway and about one hundred twenty five have been completed. Kolkata Port is connected to the industrial centers of eastern India due to the construction of river waterways. And trade has become easier with countries like Nepal, Bangladesh, Bhutan and Myanmar”, PM added.

PM also announced Kolkata Port Trust to be named after Dr. Shyama Prasad Mukherjee. “Dr. Mukherjee, the son of Bengal, laid the foundation for industrialization in the country and has been very instrumental in the development of projects such as Chittaranjan Locomotive Factory, Hindustan Aircraft Factory, Sindri Fertilizer Factory and Damodar Valley Corporation. I also remember Babasaheb Ambedkar. Dr. Mukherjee and Baba Saheb gave a new vision to post-independence India”, PM said. 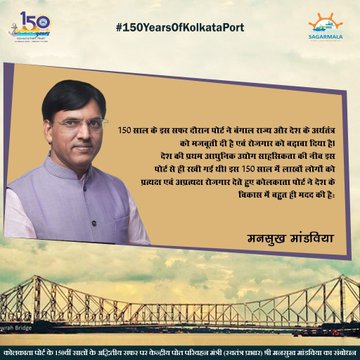 See Ministry of Shipping’s other Tweets

Shri Mandaviya said that in last 15 years, for the first time, this year Kolkata Port has made profit. He said, under the guidance of Prime Minster Shri Narendra Modi and his visionary Sagarmala Project, more than Rs1200 crores has been spent on Infrastructure development, better rail connectivity and Modernization of Kolkata Port in the last five years. 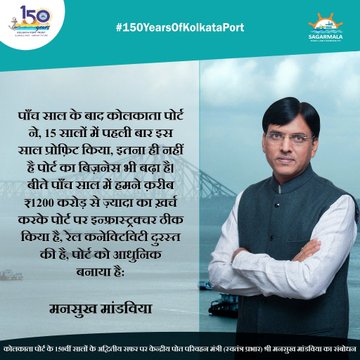 22 people are talking about this

Welfare of the Pensioners of KoPT

Shri Narendra Modi also handed over a Cheque of Rs 501 Crore towards final instalment to meet the deficit of pension fund of retired and existing employees of the Kolkata Port Trust.

The Prime Minister Narendra Modi handing over a cheque of Rs501 crore towards final instalment to meet the deficit of Pension funds of retired and existing employees of Kolkata Port Trust in Kolkata, West Bengal. The Governor of West Bengal, Shri Jagdeep Dhankhar is also see.

PM also launched the Mechanisation of Berth No.3 at Haldia Dock Complex of KoPT and a proposed riverfront development scheme.

 What Is Social Selling And Why Is It Important?

How to Write a Conclusion for a Research Paper

Meet the Youngest CEO in the world: Hillary Yip

Role of Tribal Communities in India’s Fight for Independence

Best Practices for Using a Histogram

How to manage separation anxiety in children.

Review on ‘A silent voice’

Join us on Telegram

Join us on Telegram

Do Not Sell My Personal Information